Archid is the intermediary form of the Mokolé. It is a powerful war form considered to be the "true shape" of any individual Mokolé.

The archid shape is taken from the dreaming, which comes at the Mokolé First Change. Through Mnesis, they dream about the reptiles, birds, and dinosaurs of the past, which determines the characteristics of their new Archid form. In this mystical experience, the Mokolé actually experiences the lives of her remembered ancestors and her Archid form creates itself from their body shapes.

The Archid form usually resembles a dinosaur or dragon, although there are pterosaur and sea-serpent Mokolé. Of course, a Mokolé likely has body parts that in nature didn’t occur on the same animal, such as armor on a carnosaur - their forms are dreamed, not strictly remembered. The Archid form causes Delirium just as does the Crinos form of the Garou, save in other Awakened beings and Kinfolk. The Mokolé do not cause a lessened Delirium - it is inflicted in full. Some Mokolé have a Merit which causes them to inflict Delirium on Garou and other mammalian Shapeshifters as well, when in their Archid form.

The genesis of the Archid form from the Mnesis trance during the First Change, and the resulting uniqueness of each weresaurian's form, is the reason the Mokolé Metis always die in the egg or womb. They cannot dream before hatching or birth, and have no shape at all.

To be Archid is to dream of the Lizard Kings of the past and to be them in the present. A Mokolé remembers those traits and assumes them as he grows and transforms. Such changes are permanent parts of the Mokolé's.

Air Sacs - From dreaming of the memory of the chuckwalla.
Armor - From remembering a dinosaur such as an ankylosaur.
Back Sail - From Ouranosaurus.
Binocular Vision - From Troodon.
Color Change - From a chameleon.
Contact Venom - From a poison toad.
Constricting Coils - From protoserpentis or Eastern dragons.
Crop - From Gryposaurus or a pigeon.
Deep Lung - From a mosasaur.
Disarticulating Jaw - From a large snake or Tyrannosaurus.
Dragon Masque - From Dragon himself.
Duck Bill - From a hadrosaur.
Extra Limbs - From the Dragon.
Eye Cones - From a chameleon.
Feathers - From Dinosaur Kings like the Sinornithosaurus, or Longisquama.
Fiery Pearl - From the Dragon.
Fins - From an icthyosaur or mosasaur.
Food Storage - From the Gila monster.
Fur - From the pterosaur Sordes, or even a Mastodon.
Gecko Pads - From a gecko.
Gills - From the protoserpentis or Sea Serpent.
Grasping Hands - From Iguanodon.
Hard Skull - From Pachycephalosaurus.
Hollow Bones - From Pteranodon.
Horn - From Triceratops.
Huge Size - From Apatosaurus or Allosaurus.
Jacobson’s Organ - From a snake.
Long Neck - From Diplodocus.
Long Teeth - From Tyrannosaurus.
Long Tongue - From a snake or chameleon.
Multiple Heads - From the Hydra or Naga.
Neck Frill - From Triceratops.
Nictitating Membrane - From an alligator.
Poison Sacs - From the Gila monster or a snake.
Prehensile Tail - From Diplodocus or a snake.
Regeneration - From a salamander.
Royal Crest - From Parasaurolophus or Oviraptor.
Sacral Plexus - From Stegosaurus.
Snorkel - From Brachiosaurus.
Spitter - From Dilophosaurus.
Tail Blades/Spikes - From an armored dinosaur such as Stegosaurus or Sauropelta, or from Dragon himself.
Tail Club - From Ankylosaurus.
Terrible Claws - From Deinonychus or Deinocheirus.
Thorns - From the thorny devil.
Throat Sacs and Wattles - The predecessor to birdsong, the dragons knew songs of their own. Some were barks across the plains, others were roars from valley to valley. Some creatures, like the Suchomimus, expressed themselves completely with depressed air sacs on their necks. This memory can come from the chuckwalla instead.
Upright Walking - From a goanna. Webbed Feet - From a hadrosaur.
Wings - From Archaeopteryx or Pteranodon. 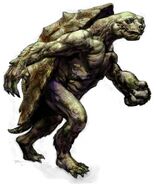 Retrieved from "https://whitewolf.fandom.com/wiki/Archid?oldid=260864"
Community content is available under CC-BY-SA unless otherwise noted.