Apis were the wereaurochs or Moon-bulls, one of the extinct Changing Breeds of the World of Darkness.

Much of the Apis’ existence focused on the cycle of birth, reproduction, and death. Apis mystics had magic to find a person’s destined mate, and if they had difficulty conceiving, the Apis could aid that process as well. Apis oversaw the rituals that accompanied puberty, adulthood, and partnership, as well as those of aging, maturing, and death. For the Apis, there was no greater honor than to bring a person into the world, advise him during his life, and then escort him out of it, acting as their charge’s midwife, teacher, and pallbearer.

Originally, the Apis walked among humanity encouraging relationships that would produce children who were cooperative and wise. They subtly discouraged matches that would produce children inclined to mindless destruction or dangerous foolishness. They also sometimes used this same ability to encourage or discourage matches between humans and shapeshifters, and were well known for being able to predict matches between shapeshifters and Kinfolk (or between two Kinfolk) that would breed true.

The Apis were destroyed during the War of Rage, though their sacrifice in the Near East prevented the Garou from reaching Africa and exterminating the Mokolé, Bastet, and Ajaba there. As their animal Kin has been domesticated and the Changing Seed within them has been virtually extinguished, there is little hope for even the most optimistic among the Fera to see their return. While mostly forgotten, the Mokolé remember the Apis through Mnesis, and the Children of Gaia honor them through the tale of the Minotaur.

As the Apis' numbers fell to extinction levels, a few took one last desperate gamble, plunging into the Deep Umbra to seek some secret that would restore their numbers before the rest died. They disappeared, and the surviving Apis eventually died out.

It is said that due to the strange ways of the Umbra, one member of the lost expedition returned many thousands of years later, to discover all he had known had died. The loss drove him into a near-perpetual frenzy, until he became permanently locked in Minotaur form, and was captured by humans, becoming the source of many human minotaur myths.

The Apis were creatures of both the sun and the moon, and their Auspices reflected this division. This made them vulnerable against both silver and gold.

The Apis were relatively social creatures who lived in herds of between six and twenty-four individuals. A mighty bull ruled each herd and defended his title against all challengers. This bull was in charge of protecting the herd and leading it in battle. A pair of cows advised the Bull. They were also in charge of breeding advice and leading the herd in peacetime. Often, a herd would attach themselves to a settlement of humans or Fera to act as local matchmakers.

The Apis were one of the most peaceful Changing Breeds, with a mastery over their Rage that put even the modern Stargazers to shame. When the wereaurochs fought among themselves, their duels were usually non-violent challenges, games of strategy or contests of singing, oratory, or spiritual proficiency. On the rare occasion that only violence could answer an insult or resolve a dispute, the Apis used the same methods as their animal kin, taking Aurochs form and locking horns until one combatant was forced to the ground. Deaths from a first-fall duel were extremely rare.

The Gifts of the Apis had often ritualistic undertones, emphasizing the cyclic nature of Gaia and her creation. Most of them concerned themselves with healing and the enhancement of fertility, but some allowed for physical enhancements that made the Apis deadly combatants once angered.

Those Changing Breeds with little interest in the inglorious task of guiding their Kinfolk, like the Garou and Nuwisha, welcomed the Apis to take over that responsibility. Others, including the Bastet and Nagah, refused to allow the Apis access to their Kin — until they needed the wereaurochs' expertise. Seeing their Kin wracked by disease or infertility, they would turn to the Apis and beg them for help.

The relations between Apis and Garou soured after the Garou grew prideful and seemed to take the Apis' advice for granted, often rejecting the first partner an Apis provided them out of arrogance. Additionally, the Apis considered it their responsibility to discover and enhance their charges’ natural talents; the Garou prized warriors above all else. Garou parents convinced themselves that their children should be warriors not out of any regard for the child, but because it would please the werewolf. Werewolves would return from long campaigns and insist that the Apis had made their child weak by teaching her music, animal husbandry, agriculture, mysticism, or other inglorious arts according to her natural inclinations.

When the Apis had enough of the werewolves' demands and started withdrawing from their communities, the first accusations of Wyrm-Taint flew around. The Apis offered to settle the disputes between them and the Garou in honorable duels, which quickly spun out of control and resulted in the first casualties of the War of Rage. Other Fera, believing that the Apis were accomplices of the wolves, whom they had advised for such a long time, refused to aid them until it was far too late.

The Apis's skill with breeding and fertility passed into human legend, and the Apis are the reason why bulls are seen in many ancient cultures as symbols of fertility.

Note that in all canon writing, Apis were wereaurochs, not werebison, and had no metis.

Apis vs. Garou in the War of Rage 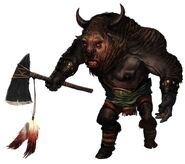