Lady Anne Bowesley, often referred to by her self-granted title of Queen Anne, is the Ventrue Prince of London.

In life, Anne was a subtle diplomat and peacemaker, adept at getting her own way by manipulating those around her. Although she lacked a formal education, she learned much of politics by listening to her father and brothers. In 1688, she and her husband were successful in deposing James II and placing William III on the British throne. Her role in the coup was noticed by Valerius, who offered her power and influence beyond her imagination. She gladly accepted, faking her death and then spending the next several decades keeping a low profile and learning the intricacies of kindred society. Once those she knew grew old and died, she reasserted herself into the halls of power she knew so well.

Her ambition and acumen fighting the Toreador and Tremere for influence over British society led to Mithras recognizing Parliament as her domain. Anne was fulfilling her father's dreams, but all was not well. Valerius now saw her as a threat. She had accomplished more in a century than he had in half a millennium. As "Lady Anne", she served under her sire Valerius, the seneschal for the ancient prince Mithras. During one of Mithras' numerous sojourns out of London in the 18th century, Valerius made a de facto coup, taking the Prince's power in all but name. But after a series of various disasters, including a Sabbat insurrection, Mithras returned in the mid-19th century. Valerius was ousted and disgraced and Anne took her sire's place in the prince's court.

On two subsequent occasions, she was given covert permission by her Prince to lower her generation though diablerie, becoming an inveterate diablerist. Those who fall afoul of her political machinations find themselves under her fangs. She constantly searches for the opportunity to diablerize elder vampires to improve her powers. Thankfully, her blood bond to Mithras masks the taint of diablerie in her aura.

When Mithras mysteriously disappeared during World War II (later to be diablerized himself by Monty Coven), Lady Anne took his place as the Prince of the city. For decades, however, she was only the acting prince, in the increasingly unlikely event that Mithras had survived. With the effective confirmation of Mithras' destruction in the 1990s, Anne consolidated her power base, isolating her rivals and enemies before any of them could make a first strike against her.

She used Parliament to pass a series of laws that weakened the other clans' power base, while taking steps to keep the primogen weak, installing Ventrue loyal to her and paying off Toreador to support her. She destroyed the Tremere who opposed her and manipulated the Brujah to withdraw from the council and the Anarchs. Anne finally rose to become the "Queen of London", ruling as the uncontested Prince of the domain and one of the most influential power-brokers of the European Kindred.

Queen Anne constantly seeks to improve herself. She is an unrepentant diablerist and already consumed two elders to raise her generation. Now she seeks more powerful blood, but to take down a 5th or even 4th generation elder will take extensive planning. She has already murdered one elder to lower her generation.

Anne fell in November 2013 during a raid of the Second Inquisition, which claimed the lives of nearly all Kindred in the city.[1] However, Fall of London states that she actually is able to stay ahead of the hunters and survive.

Despite only five feet tall, Queen Anne has shown no signs that she is little and can be ignored. She is small with delicate features and chestnut hair tied in a bun. Casual observes mistake Anne for an elegant and well-heeled matriarch, but those who know better see a confident and powerful woman who maintained her domain with an iron will. Her blue eyes betray enormous force of personality.

In V5: Queen Anne is a good-looking if pale white woman in her early 50s. Her bearing is graceful and regal, with her short grey hair always immaculately styled. She wears little makeup, and she feels no pressure to hide her age. Instead she wears it like a badge of honor, as it shows how adept she was at surviving such a tumultuous time as hers. Her clothing is all high-end and immaculately tailored, though she never wears designer labels unless few people have heard of them. For meetings and business she wears plain but very expensively tailored suits. For parties and court occasions she dresses like she is on the way to an Oscars party and has stopped off at this gathering as a favor, even if it’s her own party. She never uses any other identities. You either know her as the Prince of London or you do not know her at all. When dealing with mortals she prefers to use proxies and agents rather than deal directly. 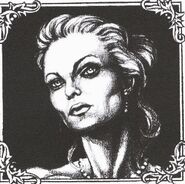 From A World of Darkness, 2nd Edition

As Mithras' seneschal from London by Night 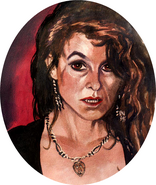 Bowesley in Fall of London
Add a photo to this gallery

Retrieved from "https://whitewolf.fandom.com/wiki/Anne_Bowesley?oldid=249652"
Community content is available under CC-BY-SA unless otherwise noted.