View source
watch 02:05
Wiki Targeted (Games)
Do you like this video?
Play Sound

Annabelle Triabell became the leading Toreador of her clan within Chicago after her sire suddenly disappeared.

Annabelle was born to a Parisian prostitute and a musician. Her childhood held many ups and downs before her, leading to her wish to marry into nobility. To her misfortune, the nobles regarded her only as a plaything to be used and tossed aside, not as an equal partner for marriage. Her appearance and the musical talents of her father draw the interest of María, her soon-to-be sire, who was dominated by Helena to create female Kindred for her sire's nourishment.

The two left Paris a short time after Annabelle had received the Embrace, and traveled to the USA, where they eventually settled in Chicago during the jazz age. When María disappeared after the War of Chicago, Annabelle assumed the post of primogen and forced her clan to attend to high society. Her balls and parties are marked in every Toreador's calendar and mercy to those who miss even one event.

Annabelle's unlife is one of excess. She leads a life full of decadent pleasure, hiding beneath the mortal alias of Ellen Stanley-Greer, wife of the publisher of the Sentinel. She pursues also a secret alliance to her childe Modius.

Of average height and slightly above average build, she has stylish shoulder-length ash-blond hair and wide, sky-blue eyes. She has a large, full mouth and the bearing and appearance of a fashion model.[1] 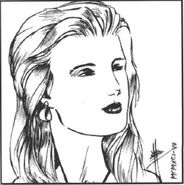