The Ankaran Sarcophagus is an ancient artifact originally unearthed in 1068 CE near Ankara, the capital of modern Turkey. It is believed to hold either an ancient Mesopotamian king or even an Antediluvian.

Based on the markings on the sarcophagus, it likely dates back to ancient Sumer or Mesopotamia, although no one's entirely sure. It was originally discovered by Julius of Gaul in 1068. After his scribe began convulsing uncontrollably and promptly died after having laid eyes on the sarcophagus, Julius Gaul called it "a nefarious and dread thing, full of some ancient and undeniable evil," and subsequently re-entombed it. Had it not been for this initial discovery, there may have been no trace of its existence whatsoever.

One day Dr. Ingvar Johansen received a package in the mail with no reply address, detailing instructions on how to find the sarcophagus and its key. In 2004, he had uncovered it and was in the process of shipping it to the United States via the Port of Los Angeles, where it would be brought to the National Museum of Natural History for examination.

However, something went wrong in transit via the NZ Elizabeth Dane. One by one, the ship's crew disappeared. The ship was found derelict, floating off the LA coast, the decks and bulkheads spattered with blood. The shipping container containing the sarcophagus was ripped wide open, and bloody handprints indicated the sarcophagus had been opened from within. The crate containing the key was missing.

The vampires of Los Angeles circulated rumors that the sarcophagus held an Antediluvian, a third-generation vampire, one of the eldest and most powerful in existence, and also a sign of Gehenna, the vampiric "end of days" scenario. The vast majority believe that it should never be opened, or even destroyed entirely. The Kindred scholar Beckett believes it to hold nothing more sinister than the mummy of an Assyrian king, a hypothesis confirmed by Dr. Johansen, who also brings to note that this king, Messerach, was attributed with 250 years worth of achievements. However, rationalizing that the previous royal names were probably just erased (or that the name was passed onto subsequent generations), the doctor dismisses the idea that the king could have lived 250 years.

The surface murals on the sarcophagus depict figures drinking bowls of blood, suggesting some form of vampirism. The hypothesis was immediately dismissed by Dr. Johansen, saying such images were ritualistic in nature or might simply have been the royalty's way of dealing with porphyric disorders (rather than evidence that whatever lies inside was a vampire).

Ultimately, all the factions of the city – Camarilla, Anarch, Sabbat, and Wan Kuei; even the Society of Leopold and Giovanni – were fighting each other over the sarcophagus. Vampires reported a sensation of impending dread starting around the same time the sarcophagus arrived in the city. Vampire researcher Beckett even arrived in town, chasing down rumors of "Caine's coffin."

The sarcophagus' key had been acquired by the Wan Kuei. An agent of Prince Sebastian LaCroix managed to liberate the key from the Temple of Golden Virtue in nearby Chinatown, and LaCroix attempted to sate his lusts on the elder he imagined would be within.

Inside he found nothing but C4 explosives, attached to timer with seconds to spare, and a note: "Boom. :) --Jack".

It's not known if the sarcophagus survived the explosion, but Jack, his Cab Driver, and the mummified corpse of Messerach the one-eyed king watched the explosion from the Hollywood hills.

At the conclusion of the game, in most of the endings the Sarcophagus is delivered to Prince Sebastian LaCroix through the efforts of the Player Character. Unknown to both the player and LaCroix, the contents of the Sarcophagus (apparently an inanimate mummy) had been swapped out for a time bomb, courtesy of Smiling Jack. LaCroix will open the Sarcophagus which will detonate the explosives, destroying the Sarcophagus, LaCroix, and possibly the player character as well (depending on the player's choices in the game).

One last cutscene is shown at the end, showing Jack watching the Venture Tower from afar and laughing beside the corpse of the mummy "Messerach" next to him; in the last moments of the game, the Cab Driver appears unexpectedly behind him (bearing a smoky black aura that no other character in the game displays), and repeating one of his earlier lines: "Remember, wherever we go, it is the blood of Caine which makes our fate". It is strongly implied that the cab driver was in fact Caine himself.

If the Player Character chooses to side with Ming Xiao (by being friendly in dialogue with her), then the player will help Ming and her Kuei-jin take out Sebastian LaCroix. LaCroix will then tell the fledgling that they are a traitor and that the Kuen-Jin are going to kill all of their kind, and that they have "sealed our fate". He says further that they will never let the fledgling live, and claims opening the Sarcophagus is the only way to truly stop them. Before he is able, he is interrupted as Ming and her personal guard burst into the room with automatics. She mocks LaCroix for his failures, before one of her men decapitates him. She then praises the fledgling for all but ensuring the fall of the Camarilla.

She says also that without Rodriguez and the Prince, the vampires will flood from their havens like rats and be killed. She further says that there is one more very dangerous Kindred in the city that could possibly stand in the way of her goals. Xiao's guards then point their guns at the fledgling; Ming Xiao taunts the fledgling, saying, "Do you really think I could let you exist within OUR Society?" She does not kill the fledgling outright, thanking them for their help, claiming she will spare them. An indeterminate amount of time later, the fledgling is tied to the sarcophagus by Ming and her men, and pushed into the murky depths of the ocean.

If the Player Character does not want Prince LaCroix to stay in power in the city of Los Angeles, but still remain loyal to the Camarilla, the only person that could support his cause is Maximillian Strauss at the Tremere Chantry in the Downtown district. Telling the Cab Driver to bring the Player to the chantry will not be an option unless the Player first figured out The Regent's Riddle and the Player did the Gargoyle Removal Service quest without revealing Strauss' secret to Isaac.

When the Player Character tell Strauss that LaCroix has been part of an alliance with the Kuei-jin, he is determined that the Prince must be dealt with quickly and severely. He will ask the Player to show his loyalty to the Tremere by first infiltrating the Golden Temple and retrieving the key for the sarcophagus and then disposing of the Prince for his recent actions.

During the ending cinematic with Prince LaCroix, Strauss will show up and commend the Player on a job well done. Even though he now possess the key, Strauss does not want the sarcophagus opened. Instead, he has the tomb hidden away inside an expansive warehouse where it can be forgotten about for ages to come.

It worth to mention that there was no Assyrian king named Messerach, and in the game he looks more like an Egyptian pharaoh. Also, sarcophagus was very rare for Mesopotamian culture, there are only few known examples[1], which are nothing like Ankaran Sarcophagus.

Sarcophagus crime scene on board of the Elizabeth Dane 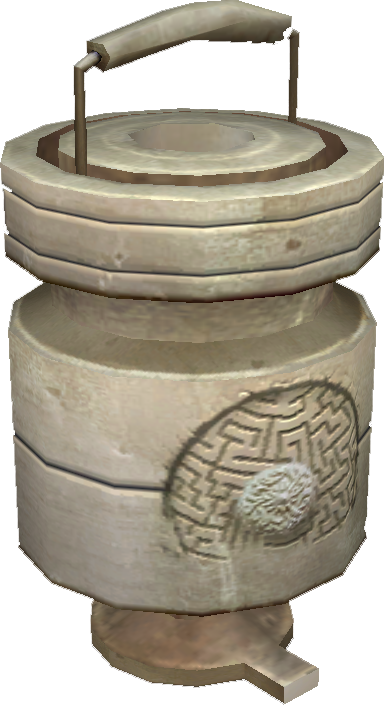 The Sarcophagus Key
Add a photo to this gallery

Retrieved from "https://whitewolf.fandom.com/wiki/Ankaran_Sarcophagus?oldid=245031"
Community content is available under CC-BY-SA unless otherwise noted.