Anita Wainwright is a Chicago Brujah of the 12th generation.

Anita was a college student in the 1950s at the University of Illinois. She made her life all about fighting the powers that be, and striking back for the people. She did Freedom Rides to Alabama, and joined the Diggers in New York City, helping to run the free store there.

Returning to Chicago, Anita wrote for The Chicago Seed, an underground newspaper. There she met a Black Panther by the name of Theodore Dooley. She thought he was great, and began a relationship with him, much to her parents dismay.

The Democratic Convention gave Anita an opportunity to organize the rally. She was in the first group to make contact with the police, and was beaten thoroughly. After recovering from her injuries several weeks later she went looking for Dooley. She found him in a basement drinking from a cop. At first she was horrified at what he had become, but after a few moments understood his thirst for vengeance, and became fascinated. It was not long before she convinced Dooley to Embrace her.

Over the years Anita's passion has changed from fixing mortal society to that of bringing justice to Kindred society. Anita has ties all over the United States to Anarch movements in the various cities. She is networked with the movers and shakers in the Anarch movement. She has been known to provide havens for visiting out-of-town Anarchs, protecting them from Chicago elders.

After losing many of her friends to the Werewolves during Under a Blood Red Moon, Anita has a new mission. She has begun to gather information on the wolves that killed her friends. If she can find them, she plans to get revenge. 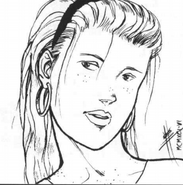 Incendiary Anita in Chicago Folio
Add a photo to this gallery

Retrieved from "https://whitewolf.fandom.com/wiki/Anita_Wainwright?oldid=228159"
Community content is available under CC-BY-SA unless otherwise noted.