Andrei is the Tzimisce Archbishop of the L.A. Sabbat in the video game Vampire: The Masquerade: Bloodlines.

Not much is known about Andrei, but he speaks with a heavy eastern European accent and mentions an "ancestral estate", leading to the speculation that he may be from Revenant stock. Well-mannered and genteel, Andrei personifies the vampiric aristocrat associated with his Clan, as well as their inhumane ways of thinking and their disregard for their Humanity.

Andrei was the one who created the snuff tape that the protagonist found and delivered to Isaac Abrams. Having mastered both Vicissitude and Thaumaturgy, he created fleshcrafted ghouls to infest the sewers of Hollywood, to exile the Nosferatu from their "pestilent nests" in order to weaken the Camarilla.

He is the archetypal Tzimisce, refined and diplomatic, but also brutal and inhumane. He maintains his aristocratic air, but also he has an aberrant, reptilian appearance, and revels in various perversities such as blood, magic, sadism, and the Tzimisce's unique discipline, Vicissitude, the vampiric art of flesh-crafting. He hates the Camarilla, going as far as trying to eliminate the Nosferatu in order to "gouge out the eyes of the Camarilla". Andrei hates the Tremere the same because of how they became vampires; through Diablerie and the destruction of a few powerful Tzimisce vampires. 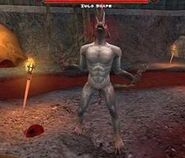 Andrei in his Zulo Shape

Retrieved from "https://whitewolf.fandom.com/wiki/Andrei_(Tzimisce)?oldid=271017"
Community content is available under CC-BY-SA unless otherwise noted.