Ananasi are werespiders, one of the surviving Changing Breeds of the World of Darkness. They call themselves Damhàn.

The Damhàn consider themselves children of Queen Ananasa, an ancient and powerful spider spirit created by the Weaver itself. As creatures of the Weaver, they seek to keep true balance between the forces of the Triat, fulfilling the Weaver's original purpose. Queen Ananasa's will is their law; she is the patron and totem of every Ananasi (though there are traitors like the Kumo and Kumatai, who abandon her). The children of Queen Ananasa have many of the advantages of spiders. In all forms other than homid, they possess multiple pairs of eyes and limbs; they are also able to consciously exude pheromones, making it easy to attract mates. They possess poison glands (but their venom's potency varies according to the species of spider they resemble), and may also spin webs in Pithus form which are tremendously strong.

Having no connection to Luna, the Ananasi are one of the few Fera who do not possess Rage (and do not normally frenzy). Instead, like some of their spider kin, they are able to draw sustenance and supernatural power from the blood of humans and animals. They may expend the power granted by this blood to heal themselves, move with supernatural quickness, instantly change forms, create webs or to power some of their gifts. They do not regenerate like other Fera; they either heal at the same rate as humans, or they may use the power of the blood they have ingested to heal themselves. Similarly they do not enjoy the immunity to disease that Garou and other Fera possess, though they can purge such diseases from their system with the power in their blood.

The Damhàn do not step sideways to enter the Umbra; instead, they assume Crawlerling form (see below) and crawl through the strands of the web, which is how they think of the Gauntlet. Being creatures of the Weaver, they find this much easier in areas of high Weaver influence, and much more difficult in areas dominated by the Wyld or the Wyrm. They are are considered bizarre and alien at best by the other Changing Breeds; in return, the Ananasi consider the other Fera (for whom they use the collective term "Ovid") beneath their notice. Perhaps because they are not Gaian offspring, Ananasi possess no vulnerability or allergy to silver, nor to any other substance as a Breed. They often point this out as proof of their superiority to the Ovid.

The Ananasi may change into many different forms:

The Damhàn's current form does affect the venom's potency. Ananasi in Pithus form produce full strength venom; in Lilian and Homid, their poison is somewhat diluted, bite of a single spider in Crawlerling is quite weak. Storytellers should determine for themselves the exact amount of damage (and any extra effects) based on the particular “spider” species, but venom always deals aggravated damage that can only be healed through medical attention or magical healing. Left unattended, the damage will never heal. Even if the spider species they emulate does not, Ananasi also possess venom-producing glands (and fangs capable of delivering this venom via a bite). The fangs are present in all forms allowing a werespider to bite with venomous effect regardless of his current shape.

When in Pithus form, Ananasi can spin webs that are almost as strong as steel and yet as flexible as natural spider webs. Pithus webs take four health levels of damage before they break. Creating webs costs a Pithus Ananasi one blood point to create a web large enough to block an industrial sized doorway, fill a small closet, or ensnare a large human (or Crinos Garou). In Crawlerling form, all Ananasi can spin webs that have the strength of ordinary spider webs – this does not require the expenditure of blood.

Ananasi have only two Breeds: Homid (born of one human parent) and Arachnid (born of one spider parent). Ananasi do not have "true" metis, instead a creature born to two Ananasi parents is a separate breed called Atahsaia, which are kept deep in the umbra. The Atahsaia only communicate with Queen Ananasa herself and are involved in the Apocalypse. Metis do exist among the Kumo – rare, horrid beings who eat their way out of their mother's body.

Damhàn also do not possess Tribes, nor Auspices. Instead, they have three aspects, and the factions within each of them. Each aspect seeks to balance the forces of the Triat member it champions; the factions approach this task in different ways. They do not however serve the Weaver, Wyld or Wyrm as they are, but rather try to fulfill what they originally represented. The three aspects are togeather known as the Triumverate.

Shortly after an Ananasi's Metamorphosis, she manifests physical changes that denote her aspect. These markings manifest as changes in pore patterns (especially on the face and torso) in homid forms, but as overt coloration and texture changes in other forms. Tenere are branded with spider-web markings that radiate in circles or wedges. Hatar markings are sinuous and serpentine. Kumoti patterns are jagged, like lightning bolts, zig-zagging and crossing over one another.

While there are overarching goals and duties for each Ananasi aspect, even within each group, distinct roles exist. These subdivisions, known as factions, ensure that every part of an aspect's responsibility receives proper focus and attention. For each of the part of the triumvirate, there are three factions, defining the individual Ananasi's duties to Queen Ananasa succinctly. An Ananasi's destined faction becomes clear during her initial period of Umbral instruction. The word Faction both denominate the three roles and the specific combination of the nine combinations of aspects and roles.

Ananasi cannot change their aspects or factions; there is no Rite of Renunciation for the werespiders. It is both their blessing and their curse that they are what they are, from the moment of their making until they are welcomed back into the Great Mother's silken embrace.

There are a total of nine different combinations of aspect and faction. They are properly called "cabals", though they are often also referred to as roles, or factions.

Aside from these, there are individual Ananasi who for one reason or another rejects Queen Ananasa, but still have not fallen to the Wyrm, nor joined the Kumatai.

The Ananasi claim to be one of the oldest Fera, older than humans. Their original form in ancient time was the Pithus form before they learned how to shape shift. They exterminated the Insect Races in the Insect Wars, to the dismay of the Weaver who felt that the Ananasi had betrayed it. As revenge for being trapped by the Weaver, the Wyrm captured Queen Ananasa, and forced the Ananasi to work for it. Some refused and instead turned to the Wyld. The Ananasi eventually found her and tricked the Garou to crack her prison. She was still trapped, but could communicate with her children, and she ordered them to keep serving all three parts of the Triat, but not as they are, but as they were meant to be.

Though the Ananasi were a prime target during the War of Rage, they actually survived relatively well, by pretending to be utterly defeated. After the War of Tears, the Yahwie has hunted Ananasi in Australia relentlessly.

Ananasi gifts often bolster their spider-like abilities, strengthening webs, allowing their venom to affect supernatural creatures, and so on. They learn a wide range of gifts allowing them to fulfill any of the roles Queen Ananasa may give them. Damhàn learn most, if not all, their Gifts directly from Queen Ananasa while meditating in their Sylie.

The Ananasi share quite a few rites with the Ovid, especially Mystic rites. The Ananasi also have a number of their own rites, taught during their time of Umbral instruction, or whispered to them by Queen Ananasa inside of their Sylie. One rite stands above all others in importance, however.

Most Ananasi lead solitary lives, each doing her part to carry out the will of Queen Ananasa, with whom she maintains a personal bond. While they are uncannily aware of the connections between all the disparate parts of reality (which they refer to as the Great Web) they, themselves, most often remain aloofly above what they see as the “lesser” parts of that same interwoven Tapestry. They are, at heart, the manipulators of those threads, rather than threads themselves. And as such, while they may give the appearance of bonding with those around them (as an effective manipulation technique), in truth they categorically avoid becoming too intimately connected with humanity, the Ovid, or even others of their own kind.

When they do organize in groups, either to accomplish a goal too large for single effort or for mutual protection, these temporary "clusters" quickly disband after the threat is dealt with or the task completed. Some among the Ovid claim this is the only way that the werespiders avoid falling to the cannibalism that often happens in nature when one spider intrudes on each others territory. The Ananasi have not deigned to answer these allegations.

Queen Ananasa's directives to Her children may be subtle and complex, but their overarching goal is a simple one: restore Symmetry to the Great Web. In order to complete this singular mission, however, Her children have innumerable likewise-herculean tasks to accomplish, not the least of which is restoring each member of the Triat to sanity (and to their original, balanced duties).

To keep Her children's own balance and focus, Ananasa has set forth a series of nine Laws that rule their every action. While humans may defy their legal system, and even Garou may debate the meaning of the tenets of their Litany, every Ananasi holds these Laws at the core of their being, knowing that without them, success is not only unlikely – it is impossible.

Ananasi may gain renown in three categories, which correspond to the three members of the Triat; they try to follow all three, no matter their faction, to gain a deeper understanding of the "Great Web" of existence. The categories are Cunning (for the Wyrm), Obedience (for the Weaver) and Wisdom (for the Wyld).

Rank is less important to Ananasi than the favor of Queen Ananasa, but their ranks are made apparent by subtle patterns on their skin, discernible in all forms. Each faction has a distinct pattern which becomes more complex as the werespider rises in Rank.

Different source books have clarified different things, but quite many things about the alien Ananasi are easy to misunderstand. Some rules have changed with the editions between the books.

In the first edition of the Werewolf Players Guide, the Ananasi were described as much more like living vampires than in later books. They were also described as extremely rare, whereas other books posited them as probably the most numerous. W20 Changing Breeds finally noted that while spiders are ubiquitous on Earth, "Noone can say" how many of those are Ananasi, leaving the actual population up to individual gaming groups. There was no difference between Hatar, Antara, and Kumo (goblin spiders). 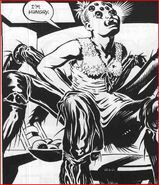 Ananasi from MET: Werewolf: The Apocalypse

Retrieved from "https://whitewolf.fandom.com/wiki/Ananasi?oldid=243066"
Community content is available under CC-BY-SA unless otherwise noted.