Ambrosio Luis Monçada was a powerful Lasombra, the sire of famous Lucita de Aragón. He held the titles of Archbishop[4] and Cardinal, making his haven at the famed Iglesia de San Nicolás de las Servitas church in Madrid, Spain.

Monçada viewed his Embrace as God's will, and through the instrument of the Curse of Caine, he had all of eternity to do the Lord's work. He was a follower of the Path of Power and the Inner Voice and attests to True Faith. Aside from confessions, he confined himself mostly to his haven, until his Final Death on the sixth day of October of 1999.

The facts about Monçada's early life are clouded; the best guesses posit him entering Madrid with Alfonso VII's repopulation efforts as a priest assigned to the city's central church (formerly a mosque). Monçada apparently was a man of ambition, talent, and faith, according to scattered documents from the period that detail his rapid ascent in the Church hierarchy. He eventually gained the rank of archbishop, but was prevented by politics from ever attaining the Papacy; even with the proliferation of popes and antipopes, there was no place for an outsider whose agenda lacked the support of powerful patrons. So, Monçada found himself and his ambition restricted to Iberia. The tide of the Reconquista had turned irrevocably in favor of Christianity at this point, and serving as a pillar of the Church during a religious war could be an advantageous position indeed.

To no one's amazement, Monçada made the most of his position. To the surprise of many, however, he did so while holding himself to a strict monasticism. Not for Monçada were the hunts, lavish banquets, and lascivious pursuits beloved by so many clergymen of the time. Rather, he was absolute in his faith, unshakable in his conviction, and resolute in his use of power for what he considered to be Heaven's causes. During an age when the corrupt clergyman became a stock character, Monçada was a towering anomaly on the ecclesiastical landscape, and an intriguing conundrum to certain Lasombra who had a vested interest in the Reconquista.

The Embrace changed Monçada less than one might suppose. Many of his compatriots in the Blood were regular visitors to his confessional; others were patrons of priests Monçada knew or had ordained himself. Within a matter of weeks, the archbishop had become acclimated enough in his new status to renew his quest for power. This time, however, he sought dominion not over the puppets, but over the puppet masters. Nothing less than a position of supremacy among the Lasombra would satisfy the freshly Embraced Monçada – but his reasons for seeking power had not changed. It was not for the glory of Monçada (that poor fleshly shell), but rather for the glory of God. Clearly, the Embrace had been God's will, and through the instrument of the Curse of Caine, Monçada had all eternity to do the Lord's work.

The best laid plans of mice, men, and priests sometimes change, however. Monçada's influence rapidly expanded throughout both mortal and immortal society. The network of royal confessors and simple parish priests raised under his tutelage allowed him communication and persuasion that few other Cainites could match. Churches and cathedrals rose, and many found their genesis deep in the heart of Monçada's fortress-like monastery. As for the Reconquista, with the weight of the priesthood brought firmly to bear on Lasombra internal politicking, the clan's support went fully over to the Christian side, and events rolled on (such as the creation of the Sabbat).

As centuries passed, however, something happened to the archbishop's faith. It never wavered, but it has evolved into something dark and terrible, a strong belief in Monçada's own damnation and a determination to earn that fate. The archbishop still believes, with an unshakeable faith, in redemption and the Resurrection. He simply knows, with an abiding resignation, that there is no salvation for him or his kind, and as God has seen fit to damn him thus, it is his duty to earn that damnation as best he might. Indeed, many Cainite scholars lay the development of the Path of Night squarely at Monçada's feet, a tribute to both his faith and his influence over others of his clan. At this conclusion, Monçada merely sneers for his own reasons.

Cardinal of the Sabbat

Monçada's position within the Sabbat and his standing in the clan have consolidated, rather than expanded, over the many nights since his Embrace. He is the spiritual anchor for many of his clanmates, and confession with the archbishop (for those Lasombra who remain Catholic) is a coveted distinction. His influence on broad policy is waning, however – some Sabbat mutter that he spends too much time on spiritual affairs and not enough on temporal ones, or that he consorts with strange and unsettling beings in his quest to "serve God's will."

In recent nights, Monçada has essentially confined himself to his haven, his chambers protected by a maze of corridors and shrines to saints that overflow with True Faith and Abyssal magic. When the world wants Monçada's advice, it comes to him; he has no interest in leaving his home, and so long as there is no pressing need for him to do so, he remained the spider in a blasphemous web.

However, Monçada finally met his demise in the catacombs of his own church. He was attacked by his own thrall – a shadow beast from the Abyss known as the Leviathan. The guardian was made confused and attacked its own master, giving Fatima al-Faqadi the opportunity to end his unlife.[5]

Ambrosio Luis Monçada, Plenipotentiary and Keeper of the Faith

Path of Power and the Inner Voice 9 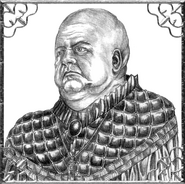