Alonzo Guillen was a Nosferatu native to Los Angeles.

Born as the disfigured younger brother of a very successful Spanish noble lady, Alonzo had a hard time accepting what he had become. He followed his sister to her land holdings in the New World, but she refused him and called him a monster. He even tried to Embrace her, but something went wrong. Frustrated and horrified, he slaughtered his brother-in-law and retreated into the mountains of what would later become Pasadena, California.

Although he generally avoids the company of other Kindred, Alonzo is one of the rare Nosferatu that have managed to find a true friend outside of the Clan, the Ventrue Henry Waters. In true Nosferatu fashion, he is also an information broker and was informed about every development within the Anarch Free States. His fate following the collapse of the Free State is not known. 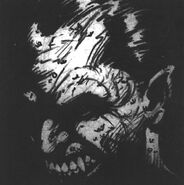 From Los Angeles by Night

Retrieved from "https://whitewolf.fandom.com/wiki/Alonzo_Guillen?oldid=229100"
Community content is available under CC-BY-SA unless otherwise noted.