Dr. Alistair Grout was the Malkavian primogen of Los Angeles until his presumed Final Death in 2004.

While the country and the year of his birth are unknown, but sometime in 19th century or at the beginning of the 20th century Grout owned an insane asylum where he did his research and work. As was typical of his profession at the time, Grout was a firm believer in phrenology. Grout also had a wife whom he loved very much, though she suffered from an incurable disease.

Unfortunately, one of Grout's patients was the Malkavian who embraced him. His sire died the next morning, when the orderlies found the pair and had the "patient" taken to the sunny outside pen, where she suffered the Final Death. Grout, left with no answers about what really happened to him, began to build up theories, trying to discover what he had become.

After long years of isolation, he discovered other like him, and became aware they had their own society called the Camarilla, while referring to Grout himself as a fellow "Kindred". He approached the other "afflicted" in order to know more about this new condition they were experiencing. After some time past his initial dealings with the others, he was made a Primogen among their kind. He took it as a token of appreciation from the vampiric population of Los Angeles due to his age and eloquence, and used his position to further his research.

Unlike other Malkavians, Grout seemed to be considerably rational and had a great mind for science. However, according to his recordings, he struggled with the voices that plagued him, providing him with secret details of their lives; Grout kept his composure until the voices started to speak outside of conversation, warning him about a powerful vampire implied to be LaCroix and "his blackest crimes, both past and future." He also deeply loved his wife, even after his Embrace.

Grout regretted the fact that he couldn't run an asylum anymore, and he missed the horrendous things that happened in such institutions (he hadn't had much respect for human life). Grout also enjoyed puzzles and riddles immensely, going so far as to transform his own house into an immense maze full of such riddles. Eventually the Malkavian began to withdraw from Kindred society altogether due to his growing paranoia, but also to dedicate himself on finding the cure for himself and for his wife, whom he kept in a prolonged state of unconsciousness, believing that it would preserve her life.

During the events depicted through the game Vampire: The Masquerade - Bloodlines, Grout's isolation causes concern among the power figures of L.A. until a Neonate is sent to investigate his silence. The neonate discover Grout's presumed remains, while a Brujah anarch called Nines Rodriguez is framed for the Primogen's murder by prince Sebastian LaCroix.

The phrenology model on the table in Alistair Grout's chambers

One of Grout's 'test subjects' 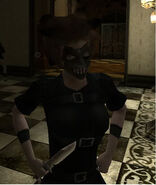 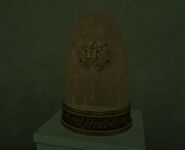 Grout's wife concept art
Add a photo to this gallery

Retrieved from "https://whitewolf.fandom.com/wiki/Alistair_Grout?oldid=261583"
Community content is available under CC-BY-SA unless otherwise noted.