Alicia Barrows is a Malkavian antitribu fortune teller and one of the Sabbat Archbishops who reside in Mexico City.

When she was a mortal fortune teller, her cards told her that the End was coming and the Old Ones would rise up and devour them all. She told her master this and he forced the Embrace on her so that he would not die alone, leading to his abandonment by his childe when Alicia killed him in the Anarch Revolt.

Her fear of the Antediluvians drove her into the Sabbat and she has continuously worked in unifying the sect so that they would have a chance when Gehenna finally arrives. As an Archbishop of Mexico City, she has substantial influence over the unlives of those around her.

She is smart enough not to flaunt her power and is alive because of the precautions she takes and her use of others to actually give the orders.

Changes her Path of Enlightenment each night 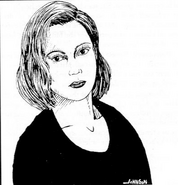 From The Chaos Factor. Art by Scott Johnson

Retrieved from "https://whitewolf.fandom.com/wiki/Alicia_Barrows?oldid=215296"
Community content is available under CC-BY-SA unless otherwise noted.