Bishop Alfonzo of Venice was one of the childer of Narses and instrumental for his campaign in finally crushing the Dream of Constantinople.

Alfonzo was a Venetian merchant in life. He gained Narses' interest after he had arranged the convenient disappearance of a rival, who hindered the establishment of lucrative trade with Sicily. Narses gave his protégé the embrace after the Normans threatened to close down the passage into the Aegean Sea.

Narses introduced Alfonzo to Constantinople as a priest for the Latin Quarter, although Alfonzo was also schooled in the theology of the Cainite Heresy. Tasking his childe with taking the wealth of Byzantium for Venice, Alfonzo sought out for allies and found them in the shadowy figures of the Inconnu. With their help, Alfonzo instigated the Latin Riots in 1185, planning to use his newfound allies to cut his ties to Venice and rule Constantinople after Michael's fall as an autonomous prince. To this end he invited Cainites of all walks of life into the Latin Quarter, leading to a rise in hostilities and various investigations from witch-hunters.

Making various blood feasts in heretical fashion, he stirred the natives even more against the Latins. When the Fourth Crusade reached the city and it was plundered, Alfonzo managed to proclaim himself Prince of Constantinople. His rule, however, lasted not as long as he had hoped, due to conflicts with his broodmate Guilelmo Aliprando and the resurgent Greeks from Nicea who threatened the Latin Kingdom. Alfonzo was destroyed in 1274. 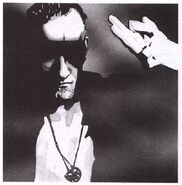 From Constantinople by Night
Add a photo to this gallery

Retrieved from "https://whitewolf.fandom.com/wiki/Alfonzo_of_Venice?oldid=188257"
Community content is available under CC-BY-SA unless otherwise noted.