Alan Sovereign is a 9th generation Ventrue currently residing in Chicago. He holds tight personal control over Chicago's banking industry and is the chief advisor in all things fiscal to his sire, Horatio Ballard. He feeds exclusively on IRS agents, other government financial lackeys and financiers.

Alan Sovereign made millions in illegitimate or questionable business practises, until the IRS finally caught up with him. He was fined for 2 million dollars for tax evasion and jailed for a year. On his first night out of prison, he was visited by Horatio Ballard, who offered him a chance of revenge. After Sovereign proved his worth by investing Ballard's money, Ballard rewarded him with his blood and made Sovereign his ghoul. Sovereign proved to be a valuable asset and made Ballard even richer.

In five years' time, Ballard had received permission from Lodin to embrace Sovereign and happily made Sovereign his lieutenant. Sovereign then very quickly turned a number of IRS officials into missing persons. His grudge toward IRS still shows in his feeding habits.

Sovereign is a completely dishonest and crooked person. He started making plans to replace Ballard as soon as someone told him how diablerie works. 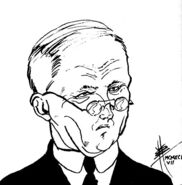 Sovereign, as depicted in Chicago by Night. 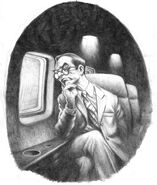 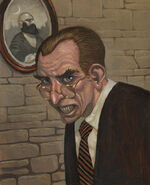 Retrieved from "https://whitewolf.fandom.com/wiki/Alan_Sovereign?oldid=229539"
Community content is available under CC-BY-SA unless otherwise noted.