Al-Muntathir is a True Brujah elder of the Sixth Generation . He is the Sire to both Ibn Khaldun and Sylvester Marlowe.

Al-Muntathir was rather pale to begin with, for an Arab. The passing of centuries as one of the undead has only exacerbated this pallid countenance, and he now appears washed out and sickly in anything other than the softest of lighting. The Elois' eyes, the eternal windows to his soul, have lightened over time as well, and they currently appear as an unsettling admixture of dark brown and cornflower blue. When seen, he wears the modest tribal attire of his breathing days, and on the rare occasions in which he speaks, he does so in a muttering staccato of formalized, classical Arabic. 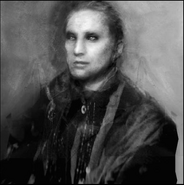 Retrieved from "https://whitewolf.fandom.com/wiki/Al-Muntathir?oldid=240268"
Community content is available under CC-BY-SA unless otherwise noted.