Al-Muntaqim is a True Brujah elder of the Sixth Generation.

Al-Muntaquim already hated the “false” Brujah. But when word arrived that his sire, Agonistes, had been destroyed by the Brujah whore Troile, Al-Muntaquim was enraged and went into his first frenzy in centuries – ripping through a caravan of visiting merchants and tearing the head off a traveling Brujah staying inside the main tent. “The Avenger” left a message that he would be leaving Africa heading east, to bring justice to Troile.

During his travels Al-Muntaquim has learned much. His quest for justice has also served as a spiritual pilgrimage. Before he had trouble staying on his original pacifist path, but after visiting with the Kindred of the East and a new mentor named Ona-Zhir; The Avenger has found a new path that fulfills him. Upon leaving Asia Ona-Zhir gave him a parting gift – a mighty spell that would allow Al-Muntaquim to draw upon the desultory power of clanless vampires, briefly giving him the strength needed to take on Troile and win.

Al-Muntaquim returned to Cairo and with the help of the Prince set up a “safe haven” for all the clanless on the Nile Island of Gezira. In reality this entire residential district comprises the border of Ona-Zhir’s ritual. When Gehenna comes and the Antediluvians return, all Caitiff inside the area will be subjected to the spell’s effects and give the power of their souls to Al-Muntaquim and leaving their bodies and blood to the hunger of the Antediluvians.

Path of the Scorched Heart 8 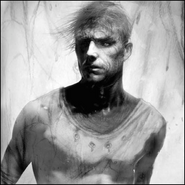