Al-Ashrad is a childe of Ur-Shulgi and was once Amr of the Assamite clan. Due to the conservative revival within the clan, lead by ur-Shulgi, al-Ashrad has joined the Camarilla with a collection of Assamite dissenters.

Al-Ashrad was once a mortal mage, who is still remembered among certain groups within the Traditions, even if few know of his eventual fate. A hunter of demons, he allied himself with Haqim and his Progeny while still a mortal man. The presence of the living among Haqim's childer inspired envy, and they plotted to kill him. The magician, however, proved to be a powerful opponent, slaying ten of the attackers including a favored childe of Haqim himself. The Antediluvian, who believed that al-Ashrad had killed his childe out of a desire to usurp its place, became furious and both argued and would have come to blows, had not ur-Shulgi interceded. He calmed the situation and dispelled the prejudices both held. Haqim reacted by taking al-Ashrad's left arm and eye to compensate for the loss of his childer and commanded ur-Shulgi to save him via the Embrace.

Al-Ashrad served as the head wizard of Alamut for following centuries, fighting in the second Baali War and perfecting the arcane protections of the mountain fortress. When the Blood Curse was levied against the Clan, al-Ashrad underwent the research to lift it. He became a figure of reverence and fear within his Clan, especially among the Warrior Caste, who mistrusted him and sometimes blamed him for the slow progression of the breaking. From al-Ashrad's studies, however, came talismans and the alchemical potions that could create an artificial diablerie.

When ur-Shulgi awoke and broke the Curse, al-Ashrad came to disagree with his sire on the future of the Clan. Not a friend of the monomaniacal devotion of the Path of Blood, and confronted with information about his sire's possible true nature garnered by the sorcerer Sarah Schneier, al-Ashrad left Alamut, turning to the Camarilla for protection. Most of the Sorcerer Caste followed his example and al-Ashrad now resides in an unspecified location, negotiating with the Inner Council about the future of the Schismatics within the sect.

His appearance is an anomaly among the dark-skinned Assamites. His skin is pale like ivory, unmarred by a thousand duels with demons and demon-touched Tremere. A diamond replacement rumored to give the Amr sight beyond sight occupies the empty socket of his left eye. His right eye is a cool-burning blue, the color of the daylight desert skies that he has not gazed upon for centuries. Al-Ashrad's hair and beard were iron-gray before his Embrace, though he now shaves them nightly.

He prefers to garb himself in simple white robes, loose and flowing and sewn with myriad pockets that contain innumerable components for his spells. The left arm of these robes remains pinned back, a continual reminder of Haqim's justice. Al-Ashrad's voice is deep and resonant, instantly commanding yet always calm and understated. The Amr moves with the ease of youth, and he has grown accustomed to compensating for the lack of his arm by using his magics to perform common tasks, an act that distresses many visitors to his laboratories who are unused to flasks leaping from tables to pour themselves.

There is an aura of power to al-Ashrad that is less seen than felt, a slight stirring in the air around him, an invisible force that seems barely contained within his being, dormant only because he wishes it to be so.

Focused Mind 5, Lure of Flames 5, Movement of the Mind 5, Path of Blood 5, Path of the Levinbolt 5, Path of Warding 5, Spirit Manipulation 5, Weather Control 5, Path of Conjuring 4, Neptune's Might 3 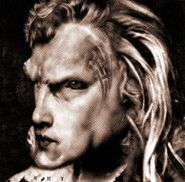 Retrieved from "https://whitewolf.fandom.com/wiki/Al-Ashrad?oldid=240770"
Community content is available under CC-BY-SA unless otherwise noted.