Ajaba are werehyenas, one of the surviving Changing Breeds of the Classic World of Darkness. 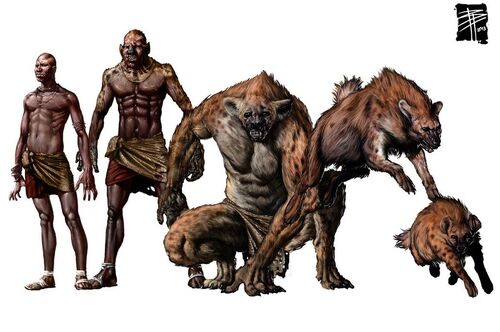 The legends of the Ajaba say that they are the African counterparts of the Garou, created to be Gaia's warriors in a continent without wolves. However, in part due to the division of roles among their genders, the Ajaba have spent much of their history bickering amongst each other.

This led to conflict with the Bastet, and eventually war with the Simba, specifically those led by Black Tooth, who nearly succeeded in wiping out the Ajaba. Since their near destruction, the Ajaba have had to rebuild their society, and much about them has changed. Ozuzo are Ajaba who fell to the Wyrm in the wake of the tragedy.

The most notable trait of the Ajaba is that they are strongly divided along gender lines: female Ajaba are warriors, with generally high Rage and lower Gnosis; males are mystics, with opposite tendencies. Some small number of Ajaba are born with inverted traits for their gender, and are seen as omens of great good or ill.

The Ajaba Breeds are Homid (born of humans), Hyaena (born of hyenas) and Metis (born of two Ajaba). Unlike Garou Metis, those among the Ajaba are hermaphroditic. They have correspondingly moderate Rage and Gnosis, falling in between the norms for male and female Ajaba, and receive some reverence because of this.

Before their fall, and despite their warrior roots, all Ajaba resembled the Garou Ragabash Auspice. Since rebuilding their society, however, they recognise two Aspects, each of which encompasses two roles differentiated by gender:

Ajaba forms are analogous to those of the Garou:

The Ajaba have always recognised Cunning and Ferocity as forms of renown, but they have realised that their downfall was in part due to their recognition of Infamy. As part of their reformation, the Ajaba now recognise a form of renown called Obligation, which rewards their duty to Gaia and their own kind in a less formal way than the Honor known to other Fera.

Politicking among the Ajaba is fierce, and social status is very important. Reigning females must always defend their position against challenges from their underlings, and these challenges are often quite a bit bloodier than similar affairs among Garou. As such, it is not uncommon for Ajaba in power to have numerous allies, among them both warriors and mystics that can help to legitimize their position. This is where the power of the males in Ajaba society reveals itself: males that enter a pack do so with no preset social rank, which allows them to ally themselves with any females who will have them. This means that Ajaba mystics wield considerable power, as they alone often determine the fate of the entire clan simply by choosing whom they wish to support in the numerous ritual challenges that plague the typical pack.

As befits their task as Gaia's warriors, Ajaba know much the same range of gifts as Garou. They lost the knowledge of any unique rites during their destruction, however.

It was the Ajaba Kisasi who founded the Ahadi, and the Ajaba maintain generally cordial relations with the other changers of Africa, though these relations are coloured by their history with Black Tooth's tribe. They hold the Mokolé in particularly high regard for their role in destroying the corrupted Simba, and still give at best a grudging respect for the Bastet of other tribes. Their only contact with Garou is through the Silent Striders, whom they respect for their martial prowess.

The Ajaba are unfamiliar with Fera not native to Africa and, like most Fera, they find it hard to understand the Ananasi.

In the Bastet breedbook, they're given three yava that the Simba used against them. 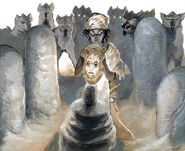 Ajaba from MET: Werewolf: The Apocalypse

The symbol used by the Bastet for the Ajaba, combining their symbols for Africa and oathbreaker