Ahmed ibn Zayyat was the Prince of Tripoli during the Dark Ages.

Before being Embraced, Ahmed was not particularly religious or pious, being a moderate successful merchant in Tripoli. His sire chose him for their similar religious views and trained him in the arts of his Clan. As a final test, Ahmed should infiltrate a crusader camp, steal a certain object, and assassinate the guards. Whatever he found changed him completely, turning the man into a devout Christian. He has since worked tirelessly to strengthen the grip of the Assamites over the Holy Land.

Ahmed ibn Zayyat, the Spear of Destiny, Prince of Tripoli 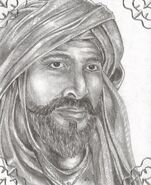 From Dark Ages Europe
Add a photo to this gallery

Retrieved from "https://whitewolf.fandom.com/wiki/Ahmed_ibn_Zayyat?oldid=229754"
Community content is available under CC-BY-SA unless otherwise noted.