Adrojai was the last Krivê of Lithuania, the head of the spiritual communities and main mediator between mortals and other supernaturals. He was noted for his especially strong ties to the Fae of the Unseelie Court.

During his childhood, Adrojai was noted for his mischievous strike and his ability to always find scapegoats for his numerous pranks. He was enlisted in a great practical joke by the Faeries at the age of eight. One day as he was gathering apples in the woods, a white horse approached him and stole the biggest one. Adrojai chased the horse into the woods, to a patch of forest where he could not find his way out. An Unseelie changeling, using Adrojai's form, pursued all manner of mischief. The prank ended when Adrojai's mother finally died of grief. Any other child would have found his exposure to the Unseelie Court nightmarish, but Adrojai was fascinated. He learned much under the tutelage of master tricksters. As an enchanted ally of the Unseelie, he was to be their eyes and ears in places the fae dared not tread. From this point onward, however, Adrojai developed a very Unseelie outlook, never fully caring about the results of his pranks or realizing how cruel they were.

By the age of 13, he had learned not only trickery, but also thievery. Venturing from his unseen home, he helped the fae take what they desired. His life was to change again, however, the night that he chose to steal a wolf cub from a Gangrel high priest. The thief was caught and brought before the current Krivê of Lithuania, a Malkavian known for his ingenious methods of settling disputes. The Krivê sat and listened to the boy’s life story, and the young man tried to blame the Unseelie for driving him to an unkind fate. So exquisite and imaginative was the story he fabricated that the Krivê decided to take him as his own servant. Ten years of service followed after which he was embraced for his faithful services. Adrojai acted as an emissary for the Krivê, and he was especially skilled at negotiating treaties between the Unseelie and mortals.

Within a year, another major event occurred in his life. A caravan of merchants made an encampment not far from the sacrae villae where the Krivê made his home. In the middle of a holy glen of oak, they celebrated their good fortune in the last village by quaffing their way through a cask of mead. The drunken Westerners were unknowingly committing great blasphemy, and the Krivê himself decided to intervene. Four crossbow bolts later, the villagers had defended themselves against an allegedly premeditated attack from an unarmed diplomat.

The following night, Adrojai sought revenge. The caravan had moved on another league to the south, and they encamped by a seemingly tranquil glade. Four beautiful young nymphs ran out of the forest into the waiting arms of the merchants, crying that they were being pursued by a terrible monster. Adrojai moved silently through the woods and, aided by the fae, he led the merchants on a Nightmare Ride that would last until they were slain by the Unseelie at dawn. The story of Adrojai’s revenge spread throughout the domains of Lithuania, and the Cainite high priests were so impressed that they accepted Adrojai into their order, ordaining him as the high priest of the terra of Kretuva.

Adrojai was named as the new Krivê in honor of his sire. When the Teutonic Knights began to build their fortresses, Adronaj was one of the most vehement voices to drive them out. But as all tricks and illusions failed to break their resolve, Adronaj lost himself more and more to his own insanity, turning the war against the Christians more bloody and brutal. As Lithuania fell more and more to the Christians, the old pagan orders dissolved and many of their members, among them Adrojai, found their Final Death. 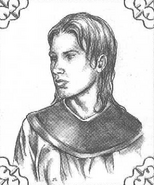 From Road of Heaven
Add a photo to this gallery

Retrieved from "https://whitewolf.fandom.com/wiki/Adrojai?oldid=229127"
Community content is available under CC-BY-SA unless otherwise noted.