Start a Wiki
watch 02:21
The Loop (Games)
Do you like this video?
The Abyss is a term employed by mages to describe the seeping rift of unreality that lies between the Realms Supernal and the Realms of the Fallen World. In the Cosmology of Atlantis, the Abyss is that which isn't, and that which has yet to be. It is the source of Paradox. It is not a place of evil (by its nature, it is not anything at all), but rather the source of natural corruption and ignorance, slowly tearing away at reality until nothing is left. 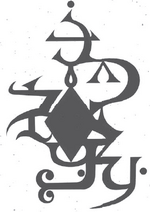 The Abyss stands as a lingering remembrance of the Celestial Ladder through which the Exarchs were able to ascend during the First Wizard’s War. When the Ivory Tower of Atlantis was sundered, something went horribly wrong. A tear in the Tapesty cut off the homeland of the Mages from the Realms Supernal, and the city of Atlantis disappeared. What replaced it was the Lie, which made all but a few oblivious to the truths of magic. The effect of this event is known as quiescence and is one of the main reasons Awakenings are so rare these days. It is, in effect, a multiverse utterly devoid of Supernal truth; in layman's terms, things that cannot, and should not, be.

The Abyss is incomprehensible for the mortal mind (logic, after all, is an element of Supernal truth) and the main enforcer of the Lie. Only the Watchtowers pierce through it and bring forth some of the lost knowledge of Atlantis. All other efforts to break through the Abyss have been proven futile.

Every time a mage uses the forces from the Realms Supernal, his magic runs the risk of ushering a bit of the Abyss into the Fallen World, creating what mages call Paradox. Some scholars of the Guardians of the Veil have theorized that the Abyss grows whenever a mage unleashes Paradox. It should be noted that the Abyss does not cause Paradox, it is Paradox, and anywhere under the influence of it or the Annunaki that compose/rule it begins to display bizarre and often seemingly contradictory traits (for instance, the Abyssal disease Dark Angel Aphasia manifests as a growing intuitive knowledge of the Abyss but a worsening loss in ability to communicate; an all-growing intellect but lack of any way to express that intellect in a useful way).

Some mages called Scelesti actively use abyssal magic for their own reasons. These individuals are reviled by the Pentacle and hunted down. The Abyss is not without life, however. Cruel, alien beings lurk within it, seeking to escape from it, such as the Acamoth and Gulmoth. These creatures actively search for mages and corrupt them to do their bidding.

The books in the Awakening series never specify if the Abyss was actually created by the Exarchs, or existed before that, or if it even exists at all, being a place of nothing and practically being a paradox in and of itself.

Retrieved from "https://whitewolf.fandom.com/wiki/Abyss_(MTAw)?oldid=246137"
Community content is available under CC-BY-SA unless otherwise noted.