Abraham DuSable is a Tremere of Chicago.

DuSable was a cultured and capable Chicago lawyer when his sire, Nicolai, found him during World War II. As he grew older, he became ever more embittered that even his education, breeding, and intelligence could not overcome the realities of a segregated America, which was every bit as real in the cities of the North as it was in the Deep South, if hidden under a more "civilized" guise. When offered the Embrace, he faked his death in a race riot. Shortly afterward, Nicolai took him to Vienna to learn more about the clan Tremere and its place in the Camarilla.

Communicate with Kindred Sire, Defense of the Sacred Haven, Deflection of Wooden Doom, Wake with Evening’s Freshness; Calling the Restless Spirit; Eyes of the Past, Illusion of Peaceful Death; Rending Sweet Earth 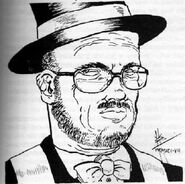 Retrieved from "https://whitewolf.fandom.com/wiki/Abraham_DuSable?oldid=236811"
Community content is available under CC-BY-SA unless otherwise noted.