View source
watch 02:17
New Pokemon Games - The Loop
Do you like this video?
Play Sound

1-56504-683-8
Aberrant: Underworld was the last book released for Aberrant, though it was only ever published as an eBook. It details the major criminal elements of the Trinity Universe at the end of the Nova Age.

From the book's cover:

From the depths of the triads' heroin fields to the Nakato Gumi's secret Kuro-Tek research and development facilities, the world of organized crime is at war with the forces of order. Will you side with Project Utopia against the purveyors of death and vice, or will the money they offer be enough to tempt you to their side?

Other times, it just takes your money and kills you.

Aberrant: Underworld details the dark secrets of the organized crime syndicates of the Aberrant world. The Camparelli-Zukhov Megasyndicate, the Heaven Thunder Triad, the Nakato Gumi yakuza and the Medellin cartel are all laid bare for the edification of those who want to run or play in an organized crime Aberrant series.

In a break from tradition, Aberrant: Underworld includes an introduction at the front of the book, with a summary of the book and a sidebar about ethnicity and crime.

Details the Camparelli-Zukhov (C-Z) Megasyndicate, the most powerful criminal organisation in the world of Aberrant, including its history in the Italian mafia and Russian crime syndicates.

The workings of the Heaven Thunder Triad, perhaps the most influential Asian criminal organisation, and its ties and resources from Hong Kong to the far east.

An in-depth look at Nakato Gumi, the dominant yakuza clan in 2015 Japan.

Information on the Medellín Cartel, the surviving drug lords of South America, and their war against Project Utopia.

The Storytelling chapter, with tips on using the criminal organisations from the book in an Aberrant series, including storylines and plot hooks.

Sample characters for use as NPCs or player character templates.

Aberrant: Underworld was released only as an eBook; it was the last book officially released for Aberrant. Like the rest of White Wolf's early entries into eBooks, Underworld was assigned a unique product code unrelated to the rest of the Aberrant line, but similar to other eBooks released around the same time.

The book is broken into chapters, each of which contains both colour in-character and black and white out-of-character material on its subject. This is because it covers multiple organizations, whereas the other Aberrant faction books - Exposé: Aberrants, Aberrant: Project Utopia, Aberrant: Teragen and Aberrant: The Directive - only covered one.

The original eBook contains a much larger number of typographical errors than usual for a White Wolf book.

"Ladies and gentlemen, as of this morning, at around 10:00 AM, a joint task-force - made up of Team Tomorrow, agents of the Federal Bureau of Investigation and officers of the New York City Police Department - arrested the members of all five "families" of the New York City Mafia..." - Caestus Pax announces the seeming end of organised crime in New York on November 7, 2001 (TU)

Alexi Zukhov
Ex-KGB agent, now one of the most feared men in Russia.
Luciano "Luc" Camparelli
Third-generation mafioso who rose to power in the wake of Project Utopia's assault on the mafia in America.
Hugo "the Bouncer" Pinnela
nova enforcer for the Camparelli-Zukhov Megasyndicate
Ho Kai Yuen and Ho Kai Ming
nova brothers and members for the Heaven Thunder Triad
Yoshiro Nakamura
Oyabun (leader) of the Nakato Gumi yakuza clan
Wilhelm Peron Lehrder
modern leader of the Medellín Cartel 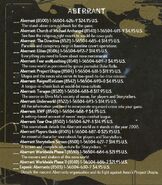